Yesterday (November 21, 2015) I ran the Secret City Half Marathon in Oak Ridge, Tennessee. This is the 3rd year they have held this event and this year, they put together a new course. 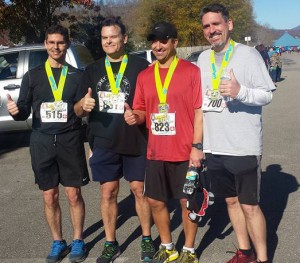 About a month before the race, I drove part of the course to get an idea of what to expect. There was one major hill I found on my expedition and it came between mile 4 and 5. Otherwise, the course looked relatively flat with no other major issues.

Leading up to the race, the majority of my training suggested that I should be able to complete the race in 1:50 (that’s one hour and 50 minutes). I had some help calculating that number. There’s this thing called VO2Max – essentially a measurement of your ability to utilize oxygen in your exercise. My Garmin Forerunner 620 suggested a VO2Max of 50 but based on my times in recent events – I had me around a 40. I used this calculator to help me with my training as well as predicted race times: http://www.runbayou.com/jackd.htm  This site then has suggested training times for intervals, threshold runs, etc. Very good to know stuff for getting the most out of your training!  All that to say that my goal was 1:50 or less.

This was the hardest race I’ve ran. I wanted to quit at one point but I laid it all out there. By the way – if you want to have a great race – you only have that one chance to do it! That way, you can’t come back and say, “Well, I had more in the tank and I should have (could have) run it faster.” Leave no doubt and just run with your best, hardest effort.

On to my thoughts into the race and leading to… A group of us met at our normal early morning running spot behind the bank off Merchants Green and AJ Hwy in Morristown at 0545. Before the meeting I ate two plain nutri-grain Eggo toasted waffles and 14oz of black coffee. We headed down to Oak Ridge shortly after..which is about an hour and 15 minutes away. We picked up our packets on Thursday afternoon with the exception of one runner. We drove a little of the course, including the main hill between mile 4 and 5. Then drove along mile 10 to most of mile 12. We parked about 1/4 mile away from the starting line and not too far from the bathroom facilities with about 45 minutes to spare. I think I counted 3 times going to the bathroom. I didn’t want to stop during the race so I made sure that wouldn’t happen.

We made our way to the starting line with about 5 minutes to spare (~755 am). There was very little announcements – then it was on to racing. One of my weekend running warriors was lined up with me. We got off to a good start and not too fast out of the gate. At times I was looking at my watch and noticed us maintaining about an 8:20 min/mile pace…which is pretty close to what I was wanting for the first 4 miles. I knew the big hill between 4 and 5 would slow me down…but after that I thought I’d have it made. Mile 1 came with no problems or issues. Thankfully there weren’t a whole bunch of people getting in the way, however, the cones were only about 4 feet from the edge of the road. Soon after mile 1 we turned right along a private road. We were on this stretch for about 3 more miles. Nothing significant to report along this stretch. It was in the shade (it was a valley) and slightly cooler than being in the sunlight. I’d guess it was about 34 degrees with little to no wind. There was one water station close to mile 2….I passed on drinking this early in the race.

We turned right and just ahead was the start to “the hill.” Some people kept the same pace all the way up (total hill length was about 3/4 of a mile) while others slowed. I was one that slowed my pace. It was still very early in the race to put it all out there only to crash soon after. Therefore, I conserved a lot of energy by just focusing on the ground in front of me and soon it was over. Boy, was I glad to reach the peak! I had my gel close to mile 5…while still on the hill. The hill was followed by a steep downhill for maybe a half mile…turned right up another short 200 yard hill. Soon I was at mile 6 and then 7. I was feeling pretty good at this point.

We turned right into a neighborhood. I never scouted this part of the route. Was that a mistake!! There were 4 small hills that really pounded me into submission. They were not large hills but a few of them were gradual and enough for me to question my will of stopping to walk. Just past mile 9, I wanted to stop. My pace slowed to 9:30 and I really felt spent. My hips/glutes were starting to bother me…which is a new muscle pain I hadn’t experienced my entire training period. I had experience of pain in the past and I used it to get through it. I knew it wouldn’t get any worse – so I pushed through it. I was also passed by a couple of people during this time, which helped inspire me to continue on. 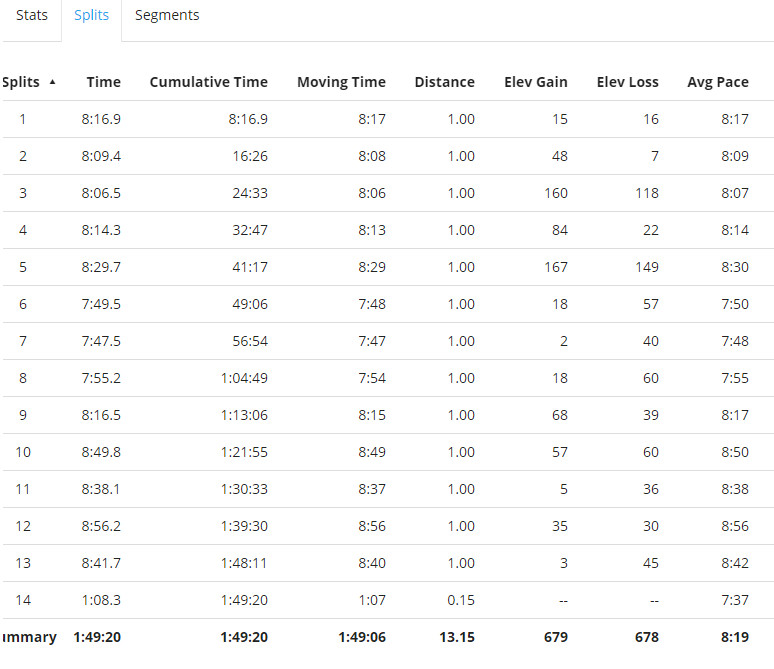 Close to mile 11, I had another slow down and lack of will. My pace faltered to 9:22. It was just a minor hill. Perhaps it was flat…but I was hurting. I felt like my HR was at the max. Later, I found I still had room to work (max HR is about 178) but my muscles would have none of it. Mile 12 felt like it would never get here!! Mile 12 I slowed again to 9:42. I was thinking I have only another 10 minutes at worse to finish…and I was ready to be done. So I picked it up again…gradually. 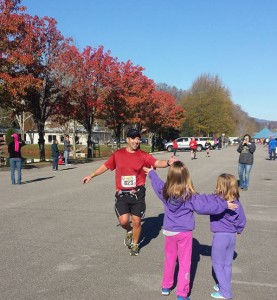 The last quarter mile, I heard my kids screaming and jumping. They were about 150 yards from the finish line. As I got closer, I figured I would give them high fives running to the finish. Then I crossed the finish line – smiling.  Smiling because I no longer had to run today, smiling because the family was there, and smiling at my time.

I worked hard for the past several months. I started from not running for the past 3.5 years back in July. I got healthier and even lost a little over 20 lbs. There’s lots of work ahead and I hope to take off at least 15 minutes of my time by next year…at the same race. 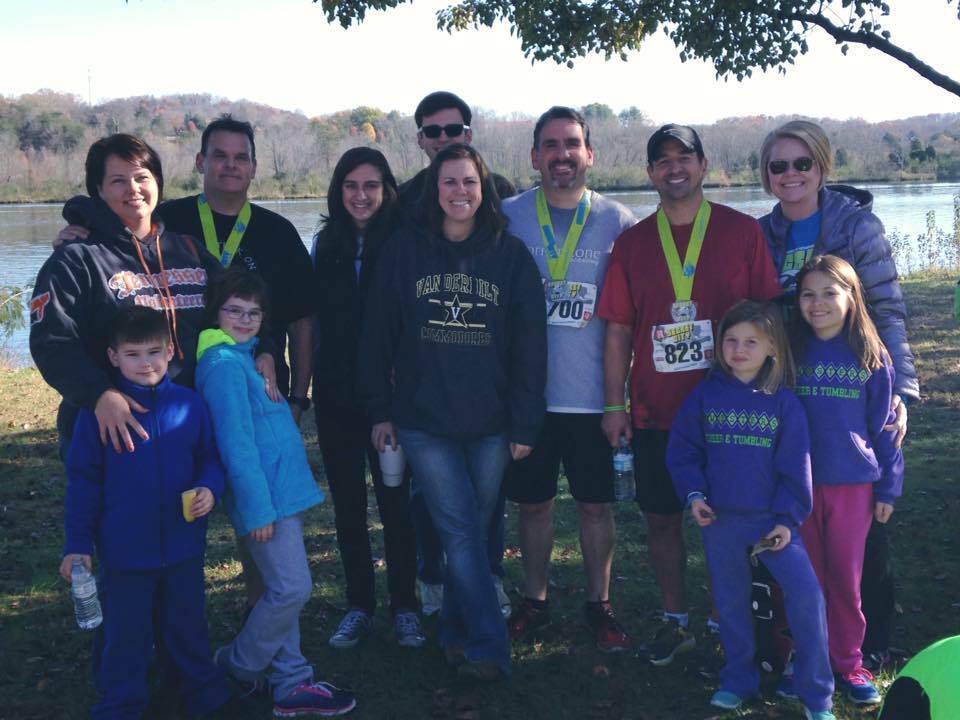